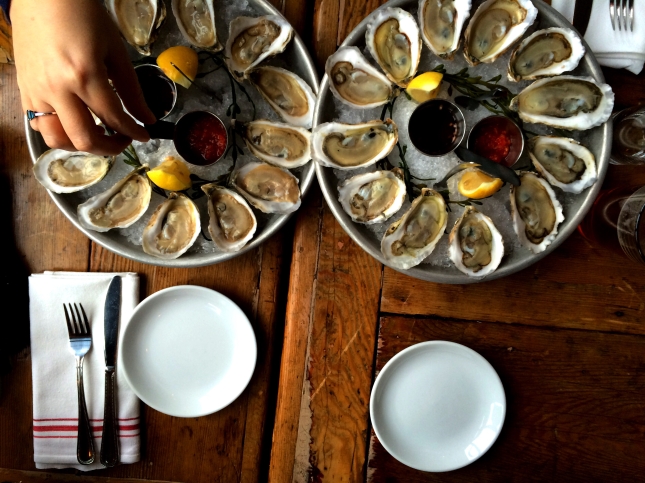 He was a bold man that first ate an oyster.

Have you ever wondered how we figured out that certain items were edible? It’s something that has intrigued me for a while. Some of my favorite clips on Alton Brown’s Good Eats show were those that featured a food anthropologist. This weekend’s NY Oyster Crawl, put together by Julie Qui at the In a Halfshell blog, gave me the push I needed to get going.

The shot above was taken at our first stop, the Grey Lady restaurant on Delancy St in NYC. The oysters on the left are Moon Shoal From Barnstable, MA and the ones on the right Fisher’s Island from Block Island Sound, NY. Both were great, but my favorite were there Moon Shoal. They had a creamy taste in contrast to the brinier Fisher Islands. This was my first time trying each of these varieties. A little post-crawl research unearthed the fact that the Moon Shoal oysters started out as Island Creeks – a variety I’ve enjoyed on a number of occasions.

So what about that person who ate the first oyster? Eating oysters dates back at least 164,000 years. Scientists discovered a cave in South Africa at Pinnacle Point that contain evidence of blades and shellfish collections. Pinnacle Point’s height above sea level is responsible for preserving the site. Other similar spots would have been washed away in one of the many rises of sea level throughout history. Here’s an NPR interview with anthropologist Curtis Marean and archaeologist Sally McBearty that provides more detail on the find.

So while we may not know who first ate an oyster, we know that humans have been enjoying them for quite a long time. There’s so much more to get into about oysters, but I’ll save that for a later post. It will give me an excuse to do a bit more tasting, not that I need an excuse for that.